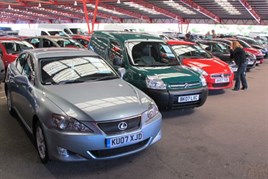 Given the current climate, this suggests dealers need to cast their net far wider than ever before in terms of both customers and stock, writes Debbie Kirlew.

But scratch the surface and a more complex and interesting picture begins to emerge.

Turning to Progress Automotive Solutions for help – as a provider of 27 dealer websites from single-site operators to multi-franchised groups which incorporates their sophisticated stock locator systems with a host of information and analytical possibilities, the company was able to offer a quick overview from the clients they represent.

A two-year snapshot of Progess’ WebBuilder used car system – beyond that, it would have been practically inconceivable for most franchised operators to stock vehicles more than five years old –
actually showed a slight decrease in the stocking of five to seven-year-old vehicles.

In 2010 it was at 9% and in 2011 it was 7% although variables include the number of websites operating in both years and the mix of used car databases utilised.

However, it also serves as a warning that statistics on face value can provide a skewed reflection of any marketplace and by digging deeper, it was apparent a more complex picture exists.

With a more specific approach, businesses active in the older used car sector were identified.

Interestingly, it was two brands at either end of the market which were making some of the biggest inroads in the retail of five-seven-year-old vehicles – Bentley and Vauxhall.

From 2010 to 2011, the Progress figures showed their respective representation of such vehicles doubling albeit a minority of their overall stock.

Eden Vauxhall, which operates six dealerships in the south and south- west, saw the number of five to seven-year-old cars retailed leap from 8% in 2010 to 14% in 2011.

As a group, HR Owen, the predominantly London-based premium retailer, experienced an increase from 4% to 8% in the same period although actual numbers are low.

However, divisional director for the group’s Bentley, Bugatti, Aston Martin and Audi brands, Paul
Westaway is quick to highlight this as an area ripe for development and that’s exactly what’s on the agenda for this year.

After all, owners of such top-end vehicles are more likely to have additional cars thereby reducing the mileage on each.