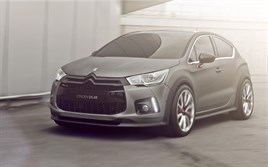 Citroen has revealed the first images of a DS4 Racing concept which will be shown at the Geneva Motor Show on March 6.

Head to AM's gallery to see all the pictures that have been released.

The concept expands Citroen’s luxury DS range further and would sit alongside the DS3 Racing in the brand offshoot’s hotter model line-up.

The new concept features carbon fibre components including an air diffuser, front splitter and wheel arch extensions. The 1.6-litre turbo petrol engine, developed by Citroën Racing, provides up to 256bhp (160bhp per litre), which is a record for a Citroën series production car. This performance is accompanied by CO2 emissions of 155g/km.

The chassis on the concept has been lowered by 35mm and the track widened by 55mm at the front and 75mm at the rear. The braking system boasts fixed four-piston callipers at the front together with 380mm diameter discs. The concept is also fitted with larger diameter 19-inch wheels and 235/40 tyres.

The new model hasn’t been confirmed for production, but Citroen could put together a limited run later this year with prices around the £30,000 mark.