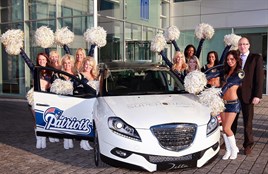 Chrysler UK has extended its partnership with the NFL in the UK to become presenting partner of ‘Super Bash’, the NFL’s official UK viewing party for Super Bowl XLVI, which takes place on February 5.

The event, being held at IndigO2 within the O2 Arena, will become ‘Super Bash, presented by Chrysler’ and the ballot for tickets was hosted via Chrysler’s Facebook page.

Chrysler will also be showcasing a specially branded Delta car at the venue, featuring the two participating teams (New England Patriots vs New York Giants), and will be providing chauffeur transport for VIP guests as part of the deal.

The St. Louis Rams cheerleaders (pictured), who are attending the event to promote the 2012 International Series game at Wembley later this year (October 28), visited Chrysler’s UK headquarters in Slough, Berkshire, as part of their programme.

Chrysler will be showcasing its new TV ad on Sky Sports during its live coverage of Super Bowl XLVI.