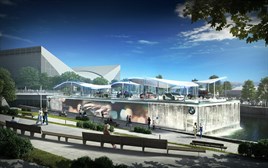 BMW will have its own pavilion as part of its status as an official automotive partner the London 2012 Olympic & Paralympic Games.

The pavilion was designed following a competition involving six architecture firms. BMW selected the British firm Serie based on its design which it said reflects the company’s “deep commitment to sustainability”.

BMW’s pavilion, which has a floor space of 800 square meters, will be built on an elevated site above the Waterworks River, situated between the Olympic Stadium and the Aquatics Centre.

Serie’s design will use river water to provide a sustainable source of cooling for the building before returning this filtered water to the river via a‘water curtain’ feature.

The two-storey structure will be built of steel with high recycled content.

The top floor will house a number of individual standalone pavilions, which will be used to highlight BMW’s latest models, including its new i range.

The lower floor will house a range of interactive visitor exhibits. Over 8,000 visitors are expected to visit the BMW pavilion each day during the Olympic & Paralympic Games.

BMW Group will provide a fleet of around 4,000 vehicles to transport athletes and officials during the games.