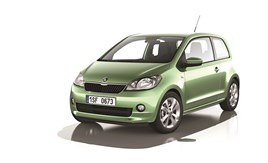 The Czech firm wants all its outlets to be fully prepared ready to handle up to double their current annual volumes by the end of 2016, it was revealed at the Geneva motor show, writes Maurice Glover.

In an interview with AM just before the announcement of his appointment as director of Volkswagen UK next month, Skoda brand director Robert Hazelwood said the network achieved its third consecutive year of record business in 2011.

“The business will come from a well-developed plan that we believe is credible, so we’re asking the network to make sure they’re ready for our new range,” he said.

Following the launch of its new city runabout model, Skoda will reveal a new car in September positioned between the Fabia and Octavia. As yet unnamed, it will be available in hatchback and estate form.

“After that, we get the next-generation Octavia next spring, so there’s real momentum in the network and we’re asking dealers to invest now to prepare for our new seven-car range.

“Our retailers have confidence in us because we have always delivered on our strategy of supplying well-engineered products at value prices. We had 20 major franchise developments last year and filled 14 open points. We aim to have no more than 150 dealers and 45 have already expanded – but of the remainder, half will be redeveloping and the rest will have to relocate their operations,” he said.