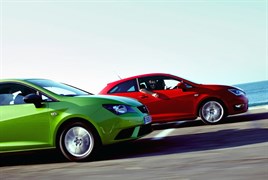 Seat has reduced prices across its new Ibiza range which goes on sale next month.

The Spanish brand has said there will be an average of up to £300 off the majority of models in the range.

As before, the UK range extends up from the E through S A/C and SE to the sporty FR model.
Seat is also offering an FR version of the Ibiza ST for the first time.

The core basic model in the new line up – the Ibiza S A/C – is offered at an average of £300 less than the outgoing S Copa editions.

On the mid-level Ibiza SE, there’s a similar £300 average price reduction versus the outgoing SE Copa.

All Ibiza body-styles have the same four derivatives on offer.

As on the outgoing model, the ‘walk’ from any Ibiza SC model to the equivalent 5dr model is £500. To move from 5dr to ST is another £710 in every case.

The new cars are available to order now, with a nationwide showroom launch planned for late April.