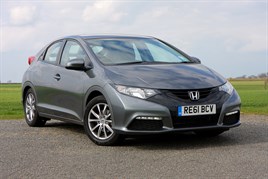 The Honda Civic has been revealed as the overall winner of the Parkers New Car Awards 2012 which aims to reveal the best value for money cars customers can buy.

Holding off stiff competition, the Civic 1.4 i-VTEC SE 5dr model came out on top in the medium hatchback category.

After analysis of 11 category winners the Civic was chosen as the overall winner on the basis that if offered more than any other in terms of value, practicality and equipment.

The awards are based on figures collated by the Parkers’ Cost of Motoring tool that calculates all of the true costs associated with owning and running a new car, including fuel consumption, depreciation, servicing, showroom and road tax.

Five British-built models came out top in their category in the 2012 Parkers New Car Awards.
The Mini Coupe, Nissan Juke, Range Rover Evoque, Toyota Avensis Tourer as well the Civic are all are built on these shores.

The other category winners were the Kia Picanto, Volkswagen Polo, Skoda Octavia, Volkswagen Touran and Audi A6. For the full results see the list below.

Dave Hodgetts, managing director, Honda (UK), said: "What a fantastic result for the new Civic. It has only been in dealerships since February and to have received this accolade so soon is a great achievement.

“What makes the award even more special is that it is based on scientific fact. Thanks to Parkers very clever cost of motoring tool, we can officially say that the new Civic is the best new car out there.

“We are also delighted to see the Jazz Hybrid making yet another appearance in Parkers results as Eco Car of the Year. It shows what excellent propositions Honda cars make to customers."

In each category there are separate price brackets. This year another price bracket was added in the Eco Cars category to reflect the increase in the number of ‘green’ models now on offer in the new car market.

The reasoning behind each of the category winners can be found here.

Kieren Puffett, Parkers Editor, said: “The statistics for the Civic tell us it offers great value for money and Honda should feel rightly proud because Parkers awards are based on statistical analysis of every new car’s running costs. We are also delighted that so many British-built cars were winners this year. It shows that Britain’s car industry is alive and kicking.”