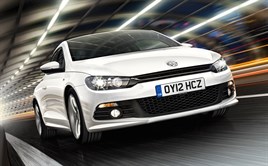 Volkswagen has refreshed its Scirocco range for Spring with a price drop on its entry level model and new specification additions.

Every model in the range now comes with RNS 315 touchscreen satellite navigation, including the entry-level Scirocco, the price of which drops by between £420 and £600, depending on engine.

At the top of the range, the Scirocco R offers the same performance as before with its 263bhp 2.0-litre TSI engine, while RNS 315 satellite navigation and Nappa leather upholstery are now also standard.