The average national labour cost at an independent garage is just over £40 per hour, according to a new survey from the Retail Motor Industry Federation’s Independent Garage Association (IGA).

It also found some notable regional variations. The lowest average labour rate was recorded in Northern Ireland at £32 per hour. The highest was in the South and South East, £48 per hour. 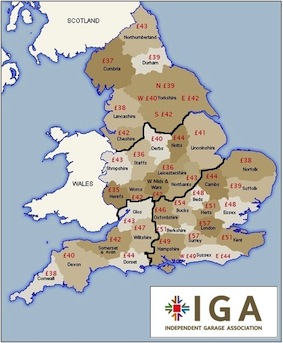 When reviewing labour costs by county, the lowest were:

Stuart James, director of the IGA, commented: “Out of more than 2,000 garages questioned only two were charging more than £90 per hour, with the vast majority charging less than £50 per hour.

“With such reasonable rates being charged by IGA members, coupled with the Trust my Garage reassurance scheme, consumers continue to receive a first rate, value for money service when using an IGA independent garage.”