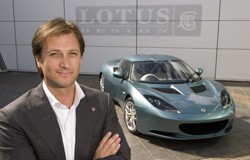 Lotus will not comment on the reasons behind the suspension, but reports from The Telegraph have linked the investigation to one of two homes rented by Lotus for Bahar.

In a statement, Lotus said: “As a result of a number of media inquiries, Group Lotus plc (“Lotus”) can today confirm that, following an operational review, chief executive Dany Bahar has been temporarily suspended from his role to facilitate an investigation into a complaint about his conduct made by Lotus’ penultimate parent company, DRB-HICOM Berhad.”

Lotus is being run by representatives from Malaysia during Bahar’s suspension period.

The latest development marks a further twist for Lotus which is waiting on parent company DRB Hicom to decide whether it will retain Lotus as part of the Proton acquisition it made this spring.

Bahar has previously hit out at the media speculation in April that he had left Lotus and the sports car marker was heading for administration.

Lotus launched a bold five-year plan in autumn 2010, spelling out plans for a five-strong range to turn the Norfolk-based company into a Ferrari rival. Model plans were delayed following DRB-HICOM’s due diligence process.