According to the latest statistics by information services company Experian, dealers sold 1,741,860 used cars in Q1, which are the highest first quarter figures since 2009 when 1,813,588 units were sold.

All car segments enjoyed uplift in sales compared to last quarter with the exception of the 4x4 segment, which includes the Range Rover Sport and BMW X5, which experienced a 1.3% drop. The MPV segment which includes the Vauxhall Zafira and Renault Scenic, saw the biggest rise in sales with 103,415 units sold, a 26.7% increase compared to last quarter.

In terms of fuel type, the electric category clearly led the upturn with both year-on-year and quarterly increases of 29% and 19.2% respectively.

"We are pleased to be able to show uplifts in used car sales across the board as well as identifying high performing categories. These include the increasing popularity of the MPV while environmental factors and the wider availability of alternative fueled vehicles seem to be driving growth of electric and hybrid models. By using this type of analytical sales data, spotting trends is made easier for dealers who can tailor their stock mix according to both their region and also the current sales environment."

All data below provided by Experian Autotmotive: 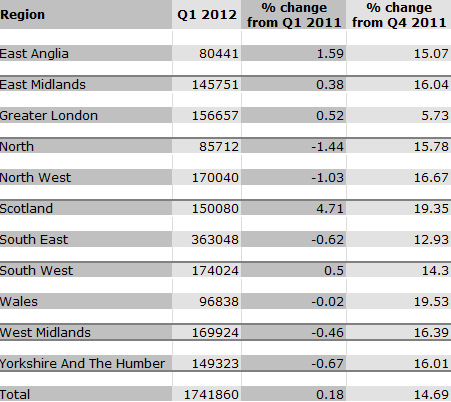