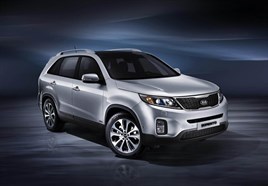 Kia has refreshed its Sorento SUV for 2013 but insists it has implemented changes driven by customer feedback rather than “just a cosmetic exercise”.

Inside the five- or seven-seater cabin, there are more soft-touch surfaces plus a new LCD instrument cluster, new center stack with seven-inch display screen, and a new console featuring a straight-gate selector with a leather-booted lever on automatic transmission models.

The new Sorento is due to arrive in the UK in the autumn and full details of UK specification and trim will be available “in due course”.

Thomas Oh, Kia executive vice president and chief operating officer of the international business division, said: “Since its introduction in 2009, the second-generation Kia Sorento has achieved more than 620,000 sales around the world.

“Today, it is manufactured in Korea and the USA, attracting over 130,000 U.S. customers last year to rank as the best-selling Kia model in the States for the second year in a row.

“We have given very careful attention to owners’ feedback, and the upgraded Sorento is not just a cosmetic exercise but a major step forward for our popular SUV.”