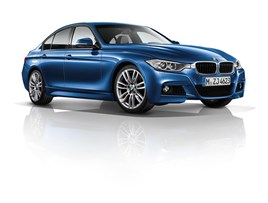 BMW will introduce a hybrid and all-wheel drive version of its 3 Series saloon in July as part of its model and engine revisions across its whole range.

The new additions will fill out BMW's model range to make sure it can compete against all rivals, including powerful hybrids from Lexus and Infiniti, as well as customers that are tempted by Audi's Quattro models.

The first AWD (or xDrive in BMW-speak) 3-series will be the 320i xDrive, powered by the 184bhp turbo four-cylinder engine. The manual car will hit 62mph in 7.4 seconds (actually a tenth of a second slower than its RWD sister) while the eight-speed auto version takes 7.5 seconds. And at £27,400 for a 320i xDrive SE, four-wheel drive costs around £1500 than the rear-drive equivalent.

The ActiveHybrid 3 is powered by the BMW TwinPower Turbo 3.0-litre six-cylinder engine in tandem with a 40kW (55hp) electric motor, it develops a combined 340hp and 450Nm of torque, reaching 0-62mph in 5.3 seconds.

At speeds of up to 37mph it can travel up to 2.4 miles solely on electric power supplied by the lithium-ion battery.

BMW says the 3 Series ActiveHybrid 3 is capable of 47.9mpg and has CO2 emissions of 139g/km which attracts the 18% benefit-in-kind company car taxation rate.

The latest version of the 3 Series still has 390-litres of useable boot space and will be priced from £40,225.

BMW will also be adding a 330d version of the saloon in July followed in November by the 316i and 320i EfficientDynamics models.