Suzuki reveals new advertising slogan: ‘HAVE TO have it’ 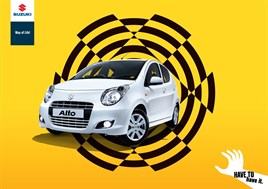 Suzuki GB has announced that its UK advertising will move ‘in a totally new direction’ with the launch of the ‘HAVE TO have it’ campaign.

Suzuki’s newly appointed advertising agency, The Red Brick Road, developed the concept around research showing that over half of people who test drive a new Suzuki go on to buy one.

Apparently this applies to 56% of Swift testers, while Alto results were even stronger at 63%.

Filmed in Hertfordshire at a specially constructed mock dealership, the first TV advert is scheduled to air on Monday 2 July 2012.

Suzuki’s sales and marketing director, Dale Wyatt, commented: “Rather than relying on generic stock adverts used on Pan European levels, we made the decision to produce a totally new and locally filmed advert.”

“We have uncovered a compelling insight and have developed a powerful new brand campaign to communicate this across all media channels.”