New car registrations up 7.9% in May 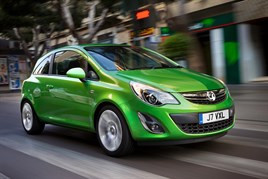 New car registrations increased by 7.9% in May to 162,288 units which has been led by growth in private sales.

According to the latest figures from the Society of Motor Manufacturers and Traders private sales were up 14.3% and the fleet market was also up by 4.8% in May, ending a three-month decline.

The May market was more than 6% and 9,000 units above SMMT’s forecast for the month.

> Detailed information and data tables available via the SMMT website.

“There is no doubt that vehicle manufacturers and their dealer networks are working hard to deliver value for money to motorists and the consistent climb in new car registrations during the first five months of the year suggests that confidence is returning, despite financial uncertainty in the eurozone.”

Dealers have questioned how true the picture of a surge in retail demand is and how much is owed to pre-registration activity, but Everitt told AM he believes the rise was from genuine consumer demand and strong offers from manufacturers and dealers.

Registrations over the first five months of 2012 have improved by 2.6% to 868,166 units. This was a 21,653 unit increase over last year, with this growth firmly established in the past three months.

As new models came to market, the alternatively-fuelled sector grew 31.8%. Petrol and diesel cars also recorded growth in the month and the year-to-date.

The Vauxhall Corsa was the best-selling model in May, with Ford’s Fiesta top over the first five months of 2012.

Sue Robinson, director of the RMI National Franchised Dealers Association (NFDA), described the May boost as "very encouraging". She said: "There are a number of great retail offers currently available to consumers which are tempting people into showrooms and customers are now willing to buy if the offer is right.

“Consumers continue to monitor their spending and are looking at ways to reduce their household expenditure. This has resulted in reasonable demand for smaller fuel efficient and easy to maintain vehicles.

“The upcoming Olympic games may cause distraction for consumers. Therefore in order for the market to remain stable the Government should offer support by reviewing schemes that boost spending.”