Honda sees fleet volumes rise in first half of the year 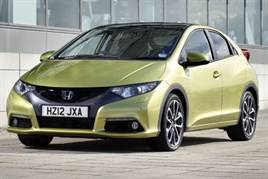 Honda has increased its UK fleet volumes by 11% year on year between January and June 2012 which it says has been driven by the new Civic.

Dealers were left without new Civic stock following floods in Thailand delayed production of component parts which led to a 50% cut in production at Honda’s Swindon factory.

The earthquake and tsunami in Japan in March 2011 also cost the brand around 10,000 sales in the UK with two months of lost output.

The Japanese manufacturer said the result has been boosted with a 26% year-to-date increase in true fleet performance.

Honda’s true fleet performance excludes rental and Motability sales and the increase has been driven by results in March (up 15% on last year), April (up 55%), May (up 94%) and June (up 97%).

The ninth generation version of the Civic has accounted for more than 4,000 sales so far this year – three times as many as the same time in 2011.

This year, Honda is expected to sell approximately 6,000 CR-Vs to corporate customers, with the new model accounting for 1,500 sales. Customers can expect to see leasing companies quoting from mid-September onwards.

The introduction of the new 1.6 i-DTEC in the Civic early next year is one of the most important new engine launches for Honda’s fleet sales in recent history. Honda is anticipating sales of 7,000 units to corporate customers in a full year.