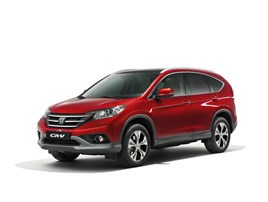 Honda will launch its fourth generation CR-V across its UK network on October 1 with priced expected to be around £18,000.

Design is evolutionary rather than revolutionary as Honda has not strayed far from the previous formula for the CR-V. There’s a slight reduction in height and length and an increased amount of luggage space by 148 litres to 1648 litres. There’s a new nose section and the front bumper is joined by a horizontal three-bar grille and deep-set headlights.

It will be the first version of the CR-V available with front-wheel drive, initially only in combination with the petrol engine, although the 4x4 version is still expected to take the majority of sales.

There will be two revised engines that are taken from the previous generation model, the 148bhp 2.2-litre diesel and the 2.0-litre petrol, which has 153bhp.

Both are available with a six-speed manual gearbox or five-speed automatic. Honda has cut emissions on the diesel from 171g/km to 149g/km of CO2 and the petrol drops from 192g/km down to 173g/km of CO2.

A 1.6-litre diesel will also join the range in the future.

View all the pictures of the new Honda CR-V in AM's gallery section.