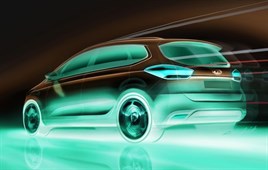 Kia has revealed a first look at its new Carens which will debut at the Paris Motor Show on September 27.

The current Carens sticks out like a sore thumb in Kia’s modern model-range, but this new model will mean the brand has replaced all of its core models. The large Sedona MPV is likely to be dropped from the line-up, rather than being replaced.

The new Carens shares little similarity with the previous model, with a lower roofline akin to the Ford S-Max, larger wheels and chrome beltline accent. However, there is a nod at the old model with the roof bars on this stylised preview image.

Completing Kia’s core product range is an important step for the Korean brand’s development. Michael Cole, Kia UK managing director, told AM recently that design boss Peter Schreyer was still “obsessed” with creating a sports car for the brand, but a production version would not happen until the core range was finished.