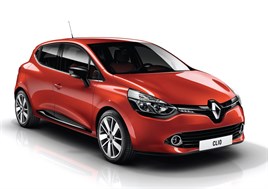 Renault has revealed the first details of its fourth generation Clio ahead of its debut at the Paris Motor Show in September.

The new model has only been revealed as a five-door so far and it sits on a wider track with Renault going for more of a sporty stance than the current Clio.

View all images of the next-generation Clio in the AM gallery section.

The new Clio will be the first Renault to benefit from a range of fresh downsized engines, starting with a three-cylinder petrol unit, which Renault claims gives the performance of a 1.4-litre engine despite only displacing 899cc. A low-inertia turbo helps push out 89bhp and 100lb ft, while standard stop-start cuts consumption.

There'll be an eco-focused version with taller gear ratios which will be road tax exempt with CO2 emissions of just 99g/km. The three-pot marks a 21% efficiency improvement over the powerplant it replaces.

Higher up the power scale is a four-cylinder 1.2-litre petrol, good for 118bhp and 140lb ft, figures comparable with a 1.6 engine, says Renault. Paired with Renault's new EDC (Efficient Dual Clutch gearbox), this powertrain will be on sale in early 2013.

There will also be a 1.5-litre diesel with 89bhp and CO2 emissions as low as 83g/km. The model features an eco-mode which can improve efficiency by 10%.

The new Clio is continuing with Renault’s association with inbuilt TomTom navigation and there will also be a seven-inch touchscreen display incorporated into the dashboard.

The new Clio is expected to go on sale towards the end of this year and prices will be revealed closer to launch.