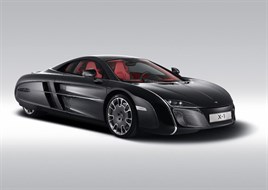 McLaren has displayed its bespoke automotive project skills with a special one off model called the X-1 for an anonymous client.

The supercar was unveiled at the Pebble Beach weekend in Monterey, USA and uses the same 625hp 3.8-litre twin-turbo V8 as its MP4-12C.

Paul MacKenzie, McLaren Special Operations programme director, said: “One of our clients who already owned a McLaren F1, a Mercedes-Benz SLR McLaren and now a 12C, wanted a unique car.

“The conversation began with our executive chairman Ron Dennis almost three years ago − before the 12C was even launched.

“The client wanted a machine that had all the capability of the 12C but wrapped in a unique body that reflected his needs and personality.”

Perhaps the most unusual styling feature is the enclosed rear wheels. The wheels are accessed by carbon panels.

The X-1 will only be shown once and then disappear into the anonymous owner's car collection.