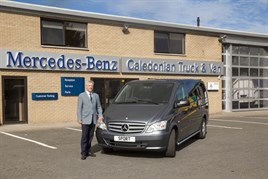 South Ayrshire council’s approval rounds off a memorable nine months for the dealership, which changed hands last October. Since then vehicle sales have surged and demand for its aftersales services has also shot up.

The company has responded by embarking on a recruitment drive, investing in 22 new members of staff to work alongside the 30 who had been employed by the previous franchisee.

Work on extending the existing six-bay workshop on Heathfield Road is scheduled to begin shortly and the new-look facility, which will be able to service up to 12 vehicles at the same time, should be up and running by the end of November.

The project is expected to cost around £220,000, on top of the £140,000 which Caledonian Truck & Van has already invested this year in specialist truck hoists, diagnostic equipment and paint mixing systems.

New owner T.O.M., the Scottish independently-owned vehicle rental specialist, has taken a back seat and given dealer principal Alex Barron and his team "encouragement and financial support" to move forward with the plans.

In the period January-July 2012 sales manager John Johnston and his colleagues sold a record 260 new panel vans, chassis cabs and Traveliner minibuses – already more than 300% up on the total for last year.

Used sales are also up by 60% in comparison to the dealership's total used volume for 2011.

Barron said: "As well as retaining all of the staff employed by the previous owner, who between them had accumulated a wealth of Mercedes-Benz product knowledge and expertise, we have welcomed many new colleagues, including experienced sales specialists and – in line with our commitment to ‘grow our own’ – six apprentice technicians and parts specialists.

"The transition of ownership could not have gone more smoothly and there was no disruption to our customers or to service levels. The new company which has emerged is certainly much better placed to deliver the industry-leading quality of service that operators of Mercedes-Benz vehicles are entitled to expect."