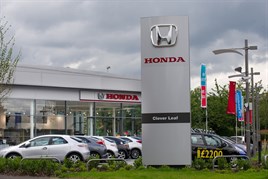 Jardine Motors Group has opened its new Bracknell Honda dealership run by its Cloverleaf Group brand after transferring its 22 staff from the previous Ascot site which will now close.

The London Road site was home to Honda’s Racing Development team from 1998 until 2009.

It is now one of the largest stand-alone Honda new car showrooms in Europe, with space for 14 new cars, plus forecourt space for around 60 ‘Approved Used’ vehicles.

There is also a seven-bay workshop for service and repair work, with further dedicated bays for MoT testing and wheel alignment.

Gary Peters, operations manager for Cloverleaf Group, said: “The most exciting part of the move to Bracknell is being able to welcome customers into a stunning new facility that is in keeping with Honda’s and Jardine’s brand image.”

Nick Campolucci, head of dealer development at Honda (UK), added: “This is an exciting addition to the Jardine Motors Group portfolio.

“With successful sites already in the Berkshire area, we look forward to inviting new and current customers into the new showroom.”