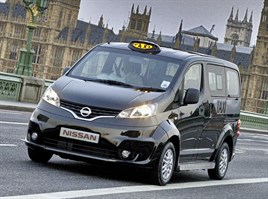 Nissan has created a new NV200 Hackney Carriage as it looks to enter the London taxi market to compete against other taxi manufacturers like LTI and Mercedes-Benz.

Nissan has also launched trials in London of its all-electric e-NV200.

The diesel version of the Nissan NV200 London Taxi is expected to be competitively priced below the new TX4 – the London Taxi Company’s current model - and will be available through a currently unnamed “designated specialist Nissan dealer”.

The specialist dealer has not been appointed yet but when it is, all sales will go through that dealer.

A spokesman for Nissan said: "Because the pre-production development car is still in prototype stage and the processes that need to be followed with TfL are still ongoing, we don’t yet have estimates for sales.

"However, the initial reaction from the LTDA and its members has been extremely good so we are expecting a very healthy take-up when the vehicle type approval is finalised and the taxis go on sale at the back end of next year."

Nissan is looking to introduce the new model at a lower price than competitors and with better fuel economy and emissions than rivals, 53.3mpg and 139g/km respectively.

The Japanese brand has already launched the NV200 taxi in Japan and has been chosen as New York City’s “taxi of tomorrow” to replace the Ford Crown Victoria.

Mercedes-Benz entered the London taxi market in 2008 with its Vito model which the brand says is now on course to build on its 40% share of the Metropolitan Taxi sector in the UK.

The Vito Taxi is sold by KPM-UK in east London.