Vertu Motors has acquired the trade and assets of three motor retail locations from Co-op Motors for an estimated £5.5m, of which £3.9m is to be deferred over three years with the balance being settled in cash from the group's existing resources.

No goodwill is payable.

In the year ended December 31, 2011, the management accounts of the acquired businesses showed a turnover of £113 million and a break-even operating result before interest and tax.  The dealerships are expected to be earnings neutral in the current financial year and then profitable in the year to February 2014.

The acquired sites add a further six franchised sales outlets to Vertu's portfolio, with Nissan and Fiat in Derby, Nissan and Peugeot in Ilkeston and Nissan and Renault in Bradford.

The Derby location has two additional showrooms which will be refranchised in the coming months, adding a further two sales outlets to the group's portfolio. The Co-Op had also operated the Mazda, Dodge, Chrysler and Jeep franchises at Derby. Vertu is not continuing with these brand here.

The Bradford property is freehold and the Derby and Ilkeston sites are leasehold with fixed rentals for the duration of the lease terms, which are both in excess of 10 years.

Robert Forrester, CEO of Vertu Motors, said: "We will integrate these new sites into our portfolio under the Bristol Street Motors brand, which is already well established in these regions.

"We are delighted to be growing our representation with our existing manufacturer partners, with the potential to add a new franchise to the group in due course at one of these sites.  The mix of both freehold and leasehold property in this transaction reflects our approach of both developing our freehold property portfolio, while also using our cash conservatively.

"With this transaction we are welcoming 200 new colleagues to the group.  We are confident that their skills and expertise in providing an outstanding customer motoring experience will help us to grow our sales and profits in the years to come."

At the end of August the Co-Operative Motor Group said it was looking to reduce its network of 11 down to six locations.

Prior to the Vertu deal it had 18 locations with a new car franchise, four aftersales sites and one bodyshop.

The AM100 group is looking to retain its Land Rover sites in Bradford, Leeds and Guiseley, as well as a Mazda site in Guiseley and Fiat, Nissan and Peugeot in Keighley and Renault authorised repairer, Nissan, Chrysler and Jeep in Nottingham.

There have been suggestions the Co-op was looking to exit motor retail completely.

However, its Land Rover dealerships have performed well with sales up 22.6% and profits up 13.1% during the period.

The three Co-op sites (yellow) Vertu (black) has bought, demonstrating how the acquisitions complement its existing network and in-fill between Barnsley and Stockton-on-Tees. (Source: AMi) 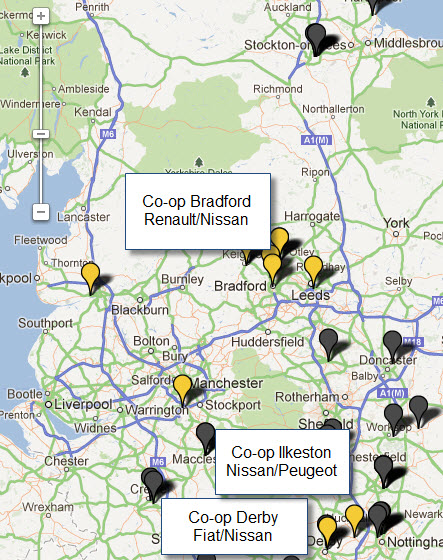 Key elements of The Co-operative Motor Group's recent full-year financial performance (yellow) demonstrating the challenges it has faced, measured against the AM100 average (black). 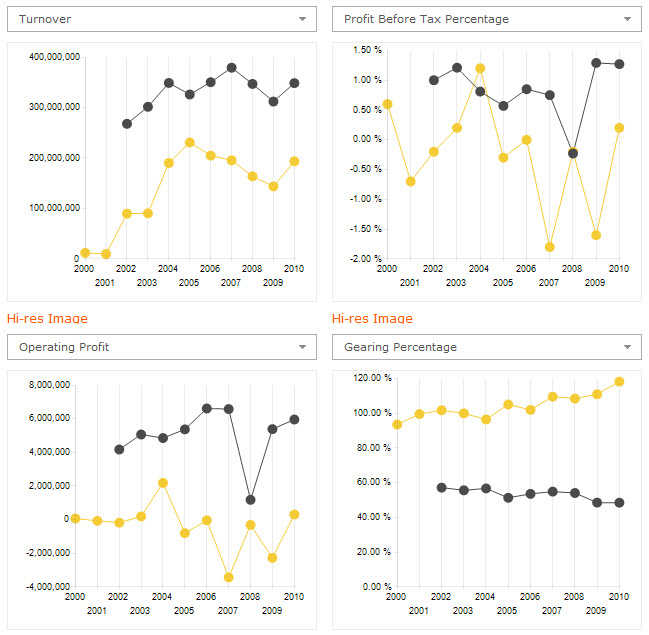