Analysis: The factors that are critical to dealers’ level of profits

What are the factors affecting dealers' used car margins over recent months?

To help identify these, where better to start than with the dealer networks who are working hard to retain every profit opportunity available?

A much more significant 55% attributed the level of profit primarily to the actual ‘sales process’ and how that is managed within the business. The remaining 25% put shrinking profits down to either preparation costs increasing or changed customer profile.

The economic circumstances of many consumers will have an impact and one dealer reported that customers were ’skimping’ on servicing costs and routine maintenance to save money. This means an increasing number of part-exchange cars coming through the doors have missed routine services. In some cases, two or three-year-old cars have not had any servicing since the initial PDI.

This view is supported by many dealers, who complain that the problem is not confined to private cars and that a significant minority of cars from other remarketing sources and suppliers are also missing important service history.
All of this impacts on dealers in a number of ways. One of them was very noticeable near the beginning of this
year, when there was very strong competition for those few cars that could really be described as ‘clean’, forcing dealers to pay what many saw as over the odds for reasonable stock. Not only is a more expensive trade price likely to put pressure on a final margin, so too will the increased preparation costs.

There may be some good news for dealers in these statistics, though. Trade values and preparation costs are out of their hands, but 55% believe the most critical factor is the sales process and that is something over which they do have influence.

Our graph below demonstrates that during the previous 12 months, the margins between average selling price and the CAP Clean values have been relatively level, with some increases and decreases from certain sectors such as the city car where we have previously written about the increased penetration from more prestige manufacturers.

We are all familiar with statements from inside and outside the dealership, such as “poor quality sales advisers and weak management”, plus observations like “when demand is greater than supply, retailers still discount the first offer to the customer”. But it is a frightening fact that only 5% of customers buy at the first offer from the retailer.

Regardless of whether you are a dealer selling just 20 cars or more than 100 per month, every £100 per unit can make a huge difference to the business. There are always improvements that can be made, support that can be requested and systems that will help, but overall, since the 1980s, not much has changed in the motor trade. In the end, the fact remains that it is people, price, process, promotion and product that drives profit.

Compete on more than price alone

Competition to appear in the search engines as the cheapest is here to stay for many and this has doubtless taken a massive toll on profit per unit. Nor can dealers do anything to avoid the consumer continuing to be better informed – in some cases more so than the professional.

But there are businesses that manage better than others in this area so it is clearly possible to compete on more than just price. It may require harder work, but it is also possible to manage the problem of sourcing cars more smartly and paying the right price, rather than just jumping into a bidding war for stock.

These are some of the things the 55% who rightly recognise process as key are already tackling. 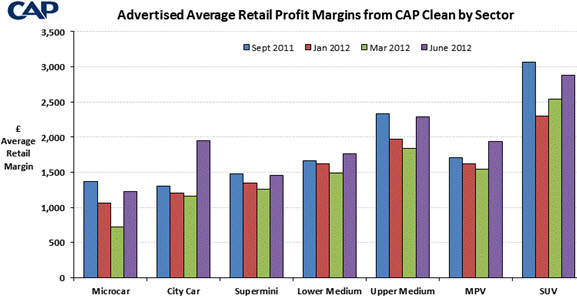