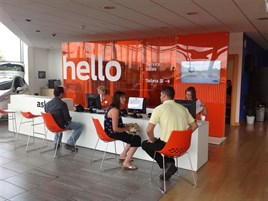 Elements of a new Ford corporate identity are being trialed at two UK dealerships as part of a seven-country European pilot project.

The initiative is focused on three elements of the retail experience; the meet-and-greet, customer lounge/waiting area and the vehicle handover zone, writes Richard Yarrow for AM.

It includes installation of an Apple Store-style ‘genius bar’ with iPads for customers to use, plus use of large words on vertical surfaces, including ‘relax’ and ‘hello’.

Dunton Ford, part of the Essex Auto Group, is one of the dealerships involved. Philip Maskell is chairman of the company and also of Ford’s Dealer Council, and said the pilot scheme would run to the end of the year.

“Ford approached us about upgrading the site, and has been doing some focus group work on the changes, which has been positive. There are cameras in there, to see how people move around the dealership and where are the hot spots.”

One further change Maskell wants is a link between the iPads and on-site DMS. It would allow customers to configure a new car informally then have it transferred to the sales staff.

He added: “The visit to the dealer is critical, it’s the experience that convinces the customer that they have made the right choice.”