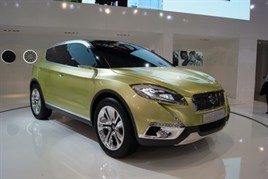 Suzuki has confirmed that its S-Cross mid-sized crossover concept will launch as a production version next year.

The S-Cross is built on an new in-house C-segment platform, and insiders are already saying they expect a production version to possibly be shown at Frankfurt this time next year and to go into production at the company's Hungarian plant. Though primarily aimed at Europeans, S-Cross will be a global car.

There will be a 1.6-litre Fiat diesel plus an unspecified petrol option, and both two- and four-wheel drive. There are no clues as to the name, but SX4, the badge used for a current small Suzuki crossover, is believed to be one possibility.

Suzuki is currently on a high in the UK because of the downsizing trend, with sales up 22 per cent so far in 2012, putting the company on course for an end-of-year total of 25,000. Almost half of sales are of the Swift, with the Alto and Splash also doing well.