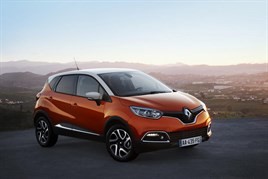 Renault has completed an online reveal of the Captur, its compact crossover SUV which will compete with the Vauxhall Mokka, Ford EcoSport and Nissan Juke.

The carmaker said the car will deliver the best of three worlds: expressive styling and driving position of an SUV, the cabin space and flexibility of an MPV and the agility of a compact hatchback.

Coming in the wake of Clio’s renewal, Captur marks the next step in Renault’s design offensive, under the leadership of Laurens Van den Acker.

"Renault Captur is a compact, unaggressive crossover which is particularly user-friendly. It benefits from Renault genes through and through,” said Benoît Bochard, director, A/B-segment product range

Renault Captur will be easy to customise and notably comes with an original two-tone colour scheme which produces a contrast between the roof and pillars and the rest of the bodywork.

The standard Renault Captur will have an equipment specification including hands-free entry, hill start assist and rear parking sensors.

Renault Captur is based on the same platform as New Clio.

The petrol and diesel engines available for the model benefit from the very latest Renault technologies and will return best-in-class fuel consumption and CO2 emissions, starting from as low as 96g/km.

Renault Captur will be manufactured at Renault’s Valladolid plant in Spain and will be unveiled at the Geneva Motor Show in March, as well as on www.captur.renault.com.

From 5th March, internet users will be able to:
¦Discover Renault’s new urban crossover in detail on their computer, tablet or smartphone.
¦Watch the Geneva Motor Show press conference.
¦Discover the book which looks back at the origins of its design.
¦Take part in the new ‘Captur the Day’ competition.