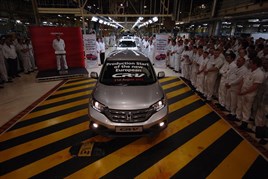 Honda has announced it expects to cut 800 of the 3,500 workers at its Swindon plant.

There will also be cuts across the plant's agency staff with 300 jobs expected to go, on top of the 800 already announced.

Honda blames sustained conditions of low demand in the European car market, and has entered into a formal consultation with its workers on a proposal to cut workforce at Swindon by 800 posts by spring 2013.

Honda Swindon, which builds Civic, CR-V and Jazz, has a maximum annual production capacity of 250,000 vehicles, but has not come anywhere close to this figure since 2008, when it made 230,423 cars.

"Honda remains fully committed for the long-term to its UK and European manufacturing operations. However, these conditions of sustained low industry demand require us to take difficult decisions. We are setting the business constitution at the right level to ensure long term stability and security” said Ken Keir, executive vice president, Honda Motor Europe.

SMMT chief executive Paul Everitt, said, “This is very disappointing news for Honda staff and their families. The decline in European new car markets and uncertain growth prospects has forced a number of vehicle manufacturers to restructure their operations.”

“Despite challenges brought by weak European demand, the longer-term prospects for the UK automotive sector remain good. The industry has seen £6 billion of new investment from a wide-range of global vehicle manufacturers during the last two years and there is demand for skilled workers in the automotive industry and other high value manufacturing sectors.

"We hope that those affected will be able to take advantage of the opportunities we know exist throughout the UK sector and its supply chain.”