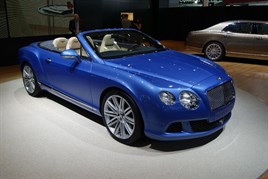 The Crewe company was badly hit by the aftermath of the 2008 banking crisis after a period of impressive growth, and has been fighting to recover lost ground ever since.

But it sold just over 8,500 cars in 2012 and has promised to back this up with double-digit growth this year.

"If we get back to 10,000 sales this year I would be delighted, but we are under no pressure to achieve that immediately. We are confident we have the right strategy to do it sooner rather than later."

In 2012 sales were up in all markets for all models except the Continental Flying Spur, which comes up for replacement this year. In a first for Bentley, it will initially go on sale in China, followed soon afterwards by other major markets.

Rose believes that long-term, Bentley is capable of more than 10,000 sales a year, particularly if the go-ahead is given for a luxury SUV based on the 2011 Frankfurt show concept.

"We can persuade the finance guys to invest in extra capacity if we need it, but first we have to be certain where we are going to be in seven, eight or nine years' time," said Rose.

A final decision on whether Bentley will go ahead with its first SUV will be made in the "relatively near future," said Rose.

"We have always said that if we decide to do it we would like it by 2015, and it would take two to two-and-a-half years to complete," said Rose.

"We are working as if it is going to go ahead and I am optimistic that it will, but this would be a big investment for the group, and we would be going into a market which currently does not exist.

"Thirty per cent of our customers have an SUV and we estimate that 90% of our sales would be capture business," Rose continued. "The US would be our biggest market to begin with, with China and the Middle East picking up."

Bentley is targeting a customer base above that for the new Range Rover and the Porsche Cayenne. Maserati also plans a super-luxury SUV to challenge the Bentley, but Rose says: "We will still be the first to market, I think."

Looking further ahead, Rose sees the potential for a longer wheelbase version of the flagship Mulsanne when the next-generation model comes along at the end of the decade, with the option of an electronic separator between the driver compartment and the rear of the car. "It's something we are looking at for China," he said.