Toyota reveals more about its Hiace replacement, the Proace 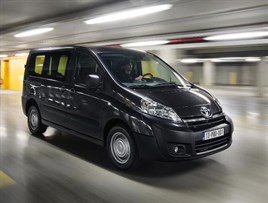 Toyota has released further images of its new Proace, a model it hopes ‘will return the company to the heart of the medium duty van market’.

The Proace has been developed in collaboration with PSA Peugeot Citroën as a replacement for the Hiace.

Production starts at the Sevelnord factory in northern France in April, with UK sales scheduled to follow shortly afterwards.

The Proace will be available in two lengths and heights, with load capacities of 5m3, 6m3 or 7m3. Payloads will range from 1-1.2 tonnes.

Euro 5 diesel engines with outputs from 89-161bhp are expected, enabling the Proace to tow up to two tonnes.

In addition to its standard form, it can be specified as a panel van, glass van or six-seat crew cab.

Toyota says a wide range of accessories will allow customers to tailor the vehicle ‘to suit a broad range of business and operational requirements’.

UK market specifications and prices will be announced soon.