Twizy gets Renault in front of the Royals 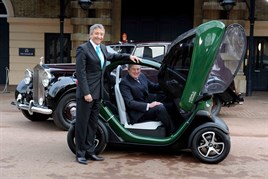 The Royal Household has just taken delivery of a one-off Renault Twizy.

Wrapped in distinctive British Racing Green to match the rest of its fleet, the keys to the 100% electric two-seater were handed over to Colonel Toby Browne, Crown Equerry, recently by UK managing director, Thierry Sybord, and Andy Heiron, UK head of electric vehicle programme.

The Twizy was specially created, but underneath lies a top-of-the-range Technic, with white interior, alloy wheels, optional doors and the new accessory fit windows.

To show a complete contrast between the oldest car on its fleet and the newest addition, the Royal Household kindly supplied a Rolls-Royce Phantom IV (1949) for the handover.

One of only 17 ever made, including a one-off pick-up used at its original Crewe factory for transporting supplies, like the Twizy, it was hand-built.