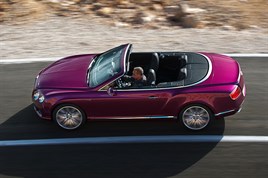 Bentley will use the Detroit Auto Show later this month to unveil its new Continental GT Speed Convertible, which it describes as ‘the world’s fastest four-seat convertible’.

Designed to resist even monsoon-force rain, the four-layer hood has been exhaustively tested in conditions from -30°C to +50°C. Inside, the handcrafted cabin features the Mulliner Driving Specification as standard.

Bentley Chairman and Chief Executive, Dr Wolfgang Schreiber, commented: “The new GT Speed Convertible will appeal to drivers who seek the sensory thrills of the world’s fastest four-seat soft-top and the practicality of a year-round grand tourer, together with unrivalled levels of luxury and refinement.”