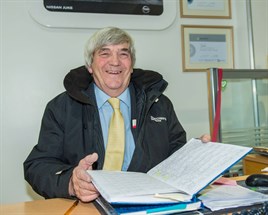 Board has kept a full record of every deal he’s ever done, stretching right back to a second-hand VW Golf sold to a local church canon on Valentine’s Day 1977.

Board said: “On my first day in the job my boss told me to get myself a ledger and keep a thorough record of every vehicle I sold.

“I guess I just never got out of the habit and I’ve now got a big pile of books at home, listing the full details of every deal I’ve ever done.

“There are probably lots of people out there who’ve sold more cars than me, but I doubt they can say exactly what they sold, when and to who.”

After several years working on a farm and in electrical retail, Board made the move into the motor trade with Dorchester Austin Rover dealer Wadham Stringer during the recession of 1977 and he’s never looked back.

The dealership has changed hands and moved premises several times since – eventually becoming Dorchester Nissan in 2004 – but throughout Bill has remained focused on selling cars.

He enjoyed his best ever year in 1988, selling 301 cars, including 64 in August. These days, he only works four days a week, but he still managed to register an impressive 134 sales last year.

So what’s the secret of his success?

“I just try to be myself, be friendly and be honest,” said Board.

He added: “When I first started in the trade everyone preached about the Pendle system – an American way of selling cars – but I didn’t get along with it.

“When I ditched the system and just started being myself, that’s when I began selling.”

“He’s such a gentleman and genuinely nice bloke that people instantly warm to him and trust him. He’s an absolute asset to the dealership and I’ve got no doubt he’ll hit the 7,000 mark before long."