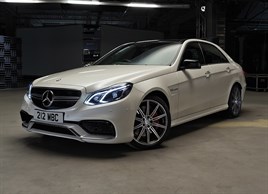 Mercedes-Benz UK has unveiled its ‘Sound With Power’ multi-media campaign to promote the new E 63 AMG.

Featuring the track ‘Pass Out’ by English rapper Tinie Tempah, it will appear in cinemas alongside Thor: The Dark World, The Hunger Games: Catching Fire and The Hobbit: The Desolation of Smaug.

The ‘soul-stirring sound’ of the hand-built bi-turbo 5.5-litre engine will also feature during ITV’s coverage of the England v Poland football match on 15 October.

An online ‘mash-up’ tool allows users to create their own version of the track and share it on Twitter, with a chance to have it air on TV.

Andrew Mallery, marketing director for Mercedes-Benz Passenger Cars, said: “Sound With Power follows on from the success of our previous Escape the Map and YouDrive campaigns.

“It innovatively conveys an exciting message about how sounds influence emotions and then invites the viewer to go one step further and engage with the brand online.”