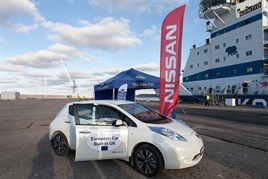 Nissan is leading a consortium which aims to install 74 rapid chargers across the UK and Ireland which aim to cover more than 680 miles of major road routes.

Installation of the rapid chargers, which will reduce electric vehicle charging times from up to eight hours down to 30 minutes, is due to be completed by the end of 2014.

The project, named Rapid Charge Network (RCN), was presented at the Trans European Transport Network (TEN-T) event in Tallinn, Estonia, which was hosted by European Commission vice president Siim Kallas. Estonia was the first country in the world to open a nationwide EV fast-charging network.

Funding for the Rapid Charge Network (RCN) project is being led by Nissan and is co financed by the European Union through the TEN-T programme, with further contributions from fellow consortium members Renault, BMW and Volkswagen and ESB Ireland's Electricity Supply Board.

It also draws on the network expertise of Zero Carbon Futures and Newcastle University.

Running on two priority road axes on the mainland, the network will link major ports and cities including Stranraer, Liverpool, Holyhead, Birmingham, Felixstowe, Leeds and Kingston upon Hull with connections to existing networks in Dublin and Belfast in Eire and Northern Ireland.