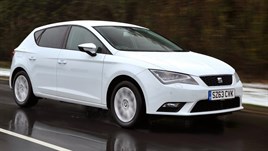 Seat has opened the order books on the new Leon Ecomotive, officially launched at the Frankfurt Motor Show.

All three versions boast a combined fuel consumption of 85.6mpg and an emissions figure of 87g/km CO2, putting it firmly in VED Band A.

Steve Mirfin, Seat UK’s Leon product manager, commented: “We benchmarked the car against the most popular models in the segment to make sure we’re at the cutting edge on real-world fuel economy, but also on value, performance and quality.”

As an extra sweetener, until the end of 2013, the Ecomotive is eligible for Seat’s Technology Pack offer.

First deliveries are expected in January 2014.