This is a remarkable year in the used car market, by any measure. Despite depreciation running at a higher level than last year, the fact is that it is still running at about half the level we once considered ‘normal’.

Considered in the context of this year’s push for new car volume, such a strong trade price performance is all the more notable. For independent dealers in particular, this is also a stellar year for used car retail sales. Last month, we reported that – with the exception of March – sales and confidence have consistently been on the rise all year.

Not that this automatically means life is easier all round for the dealer. We are still seeing a good deal of frustration across the marketplace with the lack of availability of good quality stock.

For this month’s retail insight commentary, I am focusing on further evidence of underlying used car market conditions that support the overall picture of a market in good health. Fascinatingly, the two pieces of evidence – an increase in both advertised retail prices and the number of days cars are being held in stock – seem potentially contradictory at first sight.

Although the latter number has often, historically, indicated that stock turn is suffering in a difficult market, I do not believe that is the correct interpretation in the current market. My belief, based on investigation of many dealers, is that it represents a determination among dealers to secure good sales rather than just more sales.

Looking at the figures in detail, in May the average number of days in stock was 59, compared with 53 days during the same period last year. This trend has been ongoing and in June the figure had risen to 61 days. In isolation, these numbers could be overlooked as just part of the ebb and flow of stock turn, but what makes them more interesting is the simultaneous increase in retail advertised prices. Nor is this a small adjustment because, across most sectors, the average rise has been more than £1,000.

So, what does all of this tell us about how dealers are approaching the market this year? The difficulty in sourcing used stock of sufficient quality to turn around quickly and easily for retail is no longer news – it’s just how the market is. The fact is that a car that requires little or no preparation, has the correct history and ticks all the boxes in terms of colour and specification, is worth making the most of. It is also undoubtedly true that, as consumers remain mindful of the slow rate of economic recovery, a more ‘softly softly’ approach to dealing is required and this means not rushing people into a purchase decision.

This may be the answer why dealers are, and should be, reluctant to sacrifice good stock for low profit margins.

Last October, reporting on retail prices, I suggested the need for a smarter approach. That report demonstrated that the average forecourt price change occurred every 19 days and involved a mean downward movement of £600.  This is definitely not the case today. Our latest analysis shows that the average advertised price change timescale is almost the same – it’s now at 18 days – but the average reduction has almost halved, down to £321. 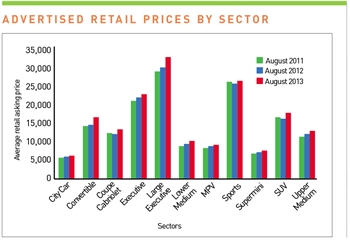 I believe dealers are highly conscious of what a vehicle is really worth in the retail market, are getting the advertised prices right first time and then holding out for something close to the original price for longer. As one dealer said to me recently: “I know my car is worth that price all day long, and I will sell it at that. If the customer wants this quality car, in the right colour, right condition and at the right price, then that will be the deal, or I will keep it.” A little direct, I will admit, but it’s not all about giving cars away, if you know the stock isn’t there to replace it.

What is encouraging about this trend is the reduced reliance on being the cheapest on the internet – an approach which ultimately damages everyone. And it is possible only because the market this year is so much more stable than before the seismic shifts we saw in 2008/09. This is certainly a good year for the retail used car sector and it is satisfying to see dealers making the most of the opportunities the current market offers.