Mitsubishi expects 20% increase in sales for the next four years 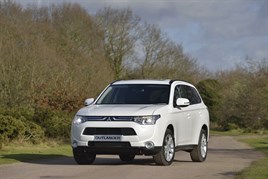 Mitsubishi Motors UK is expecting sales volumes to grow by 20% each year for the next four years as a result of a combination of new products, increased marketing spend and growth of its dealer network.

The Japanese brand is recovering in the UK following a period of decline since the peaks of 25,000 car registrations in 2005. The projected growth would take the franchise to 30,000 registrations a year by 2017.

Mitsubishi has been at the mercy of exchange rates with the yen and dealers have been awaiting new products. AM interviewed managing director Lance Bradley earlier this year and he believes the brand has now emerged from one of the most difficult periods he has known in his 13 years at the company.

Mitsubishi’s sales figures year-to-date are up 49.61% and dealers now have two new models with the Mirage and Outlander to reinvigorate the range. The Shogun SUV has also had a price realignment to help increase sales.

Mitsubishi says dealer profitability has recovered to the highest level since 2006.

Dealer recruitment is now ramping up and the network size has increased by 10% in the last six months. Mitsubishi is looking to increase its network by 25 dealers in the next 24 months which would take the business to 130 sites.

Bradley said: “2013 has been an exceptionally good year for us and sales are currently up more than 49% with 30 of our dealers doing more than double the volume than they did last year.

“It makes it so much easier to appoint new dealers when we can say that Mitsubishi is the fastest growing car brand in the UK and return on sales is the highest on record.”