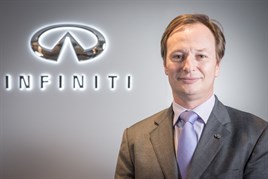 Infiniti has appointed Hugues Fabre as its new general manager for Western Europe.

Fabre will head up Infiniti’s commercial operations in western markets from November 1 and succeeds Guillaume Pelletreau who is taking up a new role within the Infiniti parent company Renault-Nissan.

Fabre said: “Infiniti Red Bull Formula One cars are winning on the tracks, while passion and innovative craftsmanship behind our models and concepts are building our reputation on the roads.

“The new generation of premium models like the Q50 and the Q30 will soon stand out for their emotion and technology. With all of this we have the greatest opportunity yet to build the brand in Europe and that is exactly what we will be doing over the coming months.”

Infiniti is hoping to make an impact on Europe’s premium business car sector with its Q50.

Infiniti EMEA vice president Fintan Knight said: “Western Europe is the world’s toughest premium market but I am convinced that by being provocative and staying true to Infiniti’s ideals, the brand’s position within that market is poised to be transformed.”

The brand is still trying to establish itself in the UK premium market, but going up against established German rivals is no easy task.

SMMT figures show registrations for Infiniti have been building slowly since the brand’s introduction here in 2009, going from 45 units to 530 units last year.

Looking at Lexus as another example of a Japanese premium challenger, Infiniti will have a long road ahead to compete with Audi, BMW and Mercedes-Benz.

Lexus has been in the UK market since the early 1990s and built up registrations to 15,000 units before the recession. The brand is still recovering with 8,404 units registered last year.