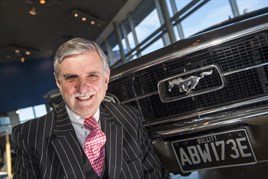 Ford main dealer group Peoples has marked its 30th anniversary by doubling its profits for the last financial year.

The group, chaired by Brian Gilda, benefited in a rise in profits and turnover.

He said: “The turnover increase reflected a significant improvement in the new car marketplace in the UK compared with the difficulties being experienced by major manufacturers in Europe.

"The profit increase is a consequence of the improvement in the new car marketplace together with strong cost control.”

Gilda said sales of used cars had exceeded expectations, not least because of the number of returning customers and affordable finance packages.

He said:  “Ford provides a great product. Their cars are the best product line ever and commercial vehicles, such as the Transit, are second to none.”

But he added: “What is perfectly clear is that consumers rely on the feel good factor and it is quite apparent that they are still taking a long hard look at discretionary spending until their own jobs and incomes can be safeguarded.”

Over the last record-breaking year, Peoples sold 15,000 vehicles and won two prestigious awards for “the highest absolute customer satisfaction” for car sales – the only Scottish Ford dealership to be given the accolade.

Gilda said Peoples’ success was built on the determination of the company’s directors, management and staff “to not only ride out the uncertain economic conditions but to deliver up the best possible results”.

The company employs more than 400 people at seven dealerships in Scotland and the north-west of England and Gilda is planning further acquisitions “if the right opportunities arise”.

Social responsibility plays a major part in Brian’s outlook and in March this year he introduced the Peoples Living Wage ensuring all his employees are paid at least 10% more than the National Minimum Wage.

With a long-term commitment to training young people at Peoples the group reported that "virtually all" of those who had joined the company’s apprenticeship scheme had become fully-trained technicians.

Ford Motor Company president and chief executive officer Alan Mulally said: “Beyond Ford, Brian's willingness to take a leadership position in the automotive industry and to engage with your local community shows your dedication to your business, your customers and your employees.”

Gilda is also a member of the mentoring panel on Dragons’ Glen which offers professional development opportunities for aspiring businesses while simultaneously raising cash for Scotland’s vulnerable children through the body’s association with Children 1st, formerly the RSSPCC.

With other entrepreneurs, Gilda will be sharing his knowledge and experience to encourage and mentor students in best business practice on GCU’s campuses in Glasgow, London and New York.

The company is privately-owned with institutional shareholders.