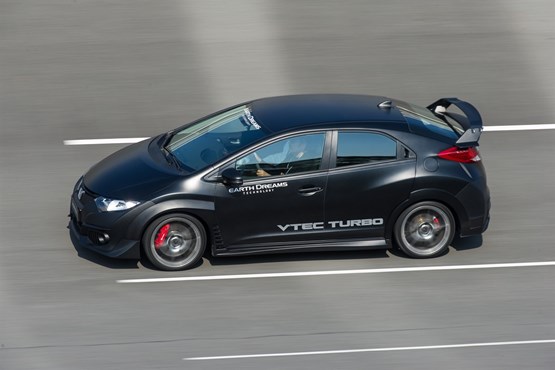 Honda will be bringing its new Civic Type R to the UK in 2015 and has revealed the first images of what the new model looks like.

Honda has also revealed more details about the car, and announced that it is using it to try to set a new lap record for a front-wheel-drive model around the Nurburgring.

At the Frankfurt show in September Honda announced that it will be switching from the familiar high-revving 2.0-litre engine to a direct-injection 2.0 turbo delivering around 40% more power to approximately 276bhp.

Honda says the new engine will more than double the Type R's torque output from 195Nm to 400, and at much lower revs.

All of this should lead to a significant performance upgrade with lower fuel consumption and emissions.

Initially the car will be offered only with a six-speed manual gearbox, but Honda engineers say they are investigating adding a double-clutch automatic transmission. One obstacle, they say, is getting a DCT to cope with the high torque output of the engine.