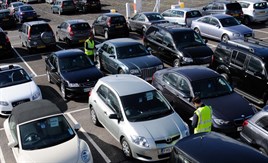 November has been the first month in 2013 when used car prices have fallen significantly in the trade, according to CAP.

There is nothing unusual about a market slowdown during November, when retail consumer focus switches to Christmas, but trade observers always keenly watch for the best moment to snap up stock for the New Year while prices are at their lowest point.

Value movements in CAP’s real time valuation service Black Book Live during November so far have brought reductions between £75 to £800 for some models.

However, a handful of price increases have also been recorded, chiefly for 4x4 and SUV style cars.

Derren Martin, senior editor of Black Book Live, said: “Some of the car supermarkets and dealers are already stocking up for January, ready for an expected resurgence of retail interest. It is growth in this trade purchase activity that will determine whether or not the market stabilises over the coming weeks or values continue to fall.

“This has been a very strong year for both new and used car sales and we believe that there is sufficient confidence in the trade to drive greater stocking activity as the weeks go on, so that this downturn may prove to be only a short-term dip.”