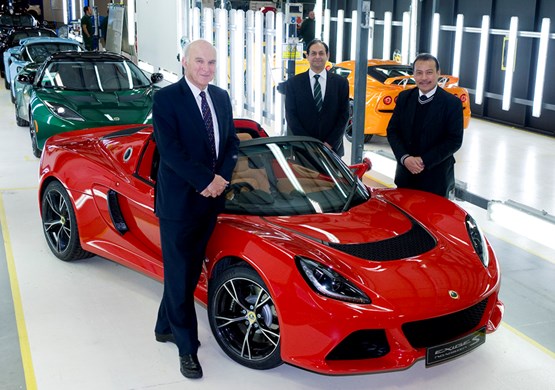 Lotus has been awarded £10.44 million by the Government’s Regional Growth Fund (RGF) to invest in new products and training.

In addition Lotus is expected to create 313 new full time jobs to support production over the coming years.

The grant is a further boost on top of a recent £100 million investment by its owners DRB-HICOM.

The Regional Growth Fund (RGF) is a competitive £3.2 billion fund operating across England from 2011 to 2017. It supports projects that are using private sector investment to create economic growth and sustainable employment.

Aslam Farikullah, chief operating officer at Lotus, said: “This grant is part of a wider strategy for Lotus created to ensure we thrive and grow.

“We are responding to increased global demand for our cars and engineering consultancy services and this grant will help to position Lotus at the forefront of global automotive innovation.

“We have very exciting plans for our sports cars and it’s a very positive move for Lotus that we’re in a position to create new jobs and to significantly contribute to Britain’s automotive industry.

“The team here at Lotus have worked very hard to secure this grant and every employee is playing their part in the stability, growth and future success of our company.”

Lotus suffered through a period of drama last year when former CEO Dany Bahar was sacked following an audit into the running of the company and an unspecified complaint against him.

Rumours of Lotus’ demise then surrounded the company following a petition submission to HM Courts & Tribunals Service for the company to be wound up. Bahar was planning to build Lotus as a rival to Ferrari with an ambitious model launch plan which would see a new Esprit, Elite, Ethos, Elise and Eterne all launched before the end of 2015.

DRB-HICOM put the model launch plans on hold while it reviewed the Lotus business. Although Farikullah has indicated the brand is now in a position to move forward with new products, it is unclear how many models from the previous plan will make it to production.