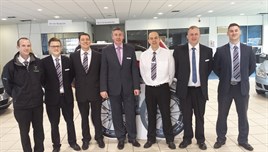 West Midlands-based Trust Group UK has opened a new Skoda site in Wolverhampton, taking its representation with the franchise to two dealerships.

The business opened the new site on Cannock Road after the group took on a previously unoccupied showroom last year following an asset acquisition from Auto Sales, Bilston. The new dealership will receive a full refurbishment in line with Skoda’s latest corporate identity standards early next year.

Blackham said: “It is a thrill to be here from the beginning because it feels like you own it from the ground up.

“Working for Trust is like being aboard a huge vessel at sea but one that moves like a speed boat; we have the large corporate support of a top plc but with the flexibility of a privately owned firm to adapt and change to the environment at a moment’s notice.”

The Trust Group was formed in 2006 and sells Volkswagens and Skodas from five sites across Wolverhampton, Redditch and Stourbridge.