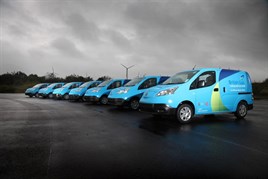 British Gas is trialling 28 Nissan e-NV200 vans throughout the winter to determine the future viability of 100% electric vehicle technology.

The trial is being conducted ahead of the e-NV200 going on sale to the public next year.

The vehicles, which will be trialled until April 2014, will be used nationwide as part of the British Gas home service van fleet to assess how they  perform in winter conditions during typical home services daily usage patterns.

Colin Marriott, general manager fleet at British Gas, said: “We’re committed to leading the industry in reducing the amount of carbon and other harmful tail pipe emissions emitted by our 13,000 strong vehicle fleet.

"This trial, the largest of its kind in the UK, is a great opportunity for us to understand how the Nissan e-NV200 vans perform during the winter as we move towards our goal of having at least 10% of our fleet running on electricity by 2015."

The trial is being run in collaboration with Hitachi Capital Commercial Vehicle Solutions (who manages the entire fleet for Centrica, British Gas’ parent company) and Gateshead College, which is local to Nissan's Sunderland Plant.

All 28 drivers have also been provided with a British Gas home charging point and access cards to public infrastructure to keep the vehicles charged up.

Jon Lawes, divisional managing director at Hitachi Capital Commercial Vehicle Solutions, said: “If this pilot proves a success it could mark a tipping point in the evolution of the commercial electric vehicle market.

“After working closely with British Gas, Nissan and Gateshead College to set up the pilot we will continue to play a major part in monitoring its progress throughout the winter months before analysing the results with our strategic partners and deciding on next steps.”