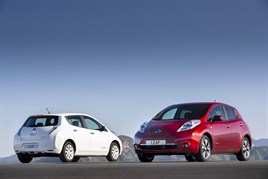 Nissan has sold 3,000 units of its Leaf electric vehicle in the UK since it went on sale in 2011.

The figures show the Leaf has taken the highest percentage of sales in the UK for electric vehicles as the Government’s statistics show that as of September 30, 2013, 5,702 claims for a £5,000 contribution have been made through the Plug-in Car Grant scheme since January 2011.

Nissan launched the second generation version of the Leaf in May 2013 and the brand said it sold 1,300 units within six months.

Jon Pollock, Nissan GB sales director, said: “The Leaf is a true pioneer in every sense and in its lifetime it’s already done a huge amount to change attitudes and open minds in the UK and across the world.

“We expect that trend to continue rising as the model’s visibility increases and the rapid charging infrastructure expands across the UK.” Nissan will be building a network of 74 rapid chargers across the UK which will take a Leaf from empty to full charge in 30 mins. The chargers are expected to be installed before the end of next year.

The £5,000 Plug-in Car Grant can be used by customers when purchasing the following vehicles: