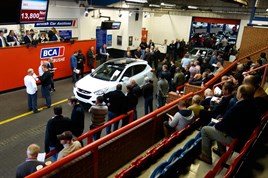 As average used car values have surged to record levels during 2013, BCA suggests next year could bring more of the same in the used car market as the availability of retail quality used cars is likely to remain limited.

Average used car values in 2013 have seen a substantial year-on-year rise over 2012 according to BCA’s most recent Pulse Report, underlining the on-going value evolution in the used car market.

Demand for first time to market fleet and lease stock has seen values rise by around 15% compared to a year ago.

Simon Henstock, BCA’s UK operations director, said: "We have seen an upturn in the supply of dealer part-exchanges at BCA in 2013, reflecting reports that retail sales have been strong.  However, supplies of fleet and lease vehicles remain constrained, a consequence of the reduced new car sales to the business sector following the onset of the financial crisis in 2008.

“While new car volumes have recovered well in 2013, it will be some time before we see those volumes reach the used car sector.

"The availability of three-five year old cars will continue to be depressed - at least until 2015, when compared to the volumes available before the recession took hold.”

Henstock added: “A year ago, we were saying that used car values could not possibly maintain this upward price trend forever and, while that is no doubt correct, there has been little in 2013 to suggest a sustained fall in values any time soon.

"Both fleet/lease and dealer P/X values have been running at record levels at BCA in recent months as dealers have competed for stock for their retail forecourts.”

“Looking into 2014, January typically brings an uplift in activity, and this is usually sustained until the Easter period – which often represents a watershed in demand.

"Whether or not we see the sustained price evolution we have experienced over the past 24 months will largely depend on stock availability and buyer confidence, as price is effectively set by the balance between supply and demand.

"Making it easy for professional buyers to source and acquire stock is critical, so they can turn retail opportunities into firm sales and the digital arena and efficient logistics both have big roles to play here.”

According to Henstock, continuing economic confidence is the key factor going forward.

He said:“Recent indicators suggest the economy is improving and employment levels remain high and this may tempt even more retail buyers to consider changing their current vehicle for a ‘newer’ used car.  If retail demand rises we can expect to see even more competition in the wholesale markets with the inevitable rise in average values as a consequence.”

Dealers can now read AM's guide to how dealers can increase profits from their used car operations and AM's used car supplement special on the science behind acquiring the right stock and selling it for maximum profit.