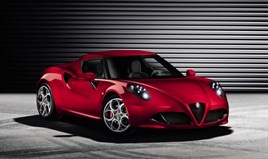 Alfa Romeo has revealed the production ready version of its 4C mid-engined sports car which will go on sale in the UK this year.

The new model is expected to be just over £50,000 in the UK and Alfa Romeo dealers are already taking orders for the new model.

The 4C will spearhead Alfa Romeo’s revival in the US and attract more people to the brand which has had a reduced model line-up in the UK in recent years.

At less than four metres long, around two metres wide and 1180mm tall, the 4C is only a handspan longer than a Lotus Elise, but wider than a Porsche Cayman.

The 4C is expected produce 237bhp, and weigh less than 1000kg. The body of the production version is very similar to the 2010 concept car.

The new model will be powered by a 1.7-litre '1750 Turbo' engine and sends power to the rear wheels via Alfa’s twin-clutch paddleshift gearbox.

An Alfa Romeo dealer told AM: "It's a halo car that will re-affirm Alfa Eomeo as a sporting and innovative brand, recognisable to Giulietta/Mito prospects & owners as from the same line as their car, yet should be able to show a Porsche Cayman up.

"It’s a fantastic way forward for the brand and this car will suit specialist and passionate dealers."