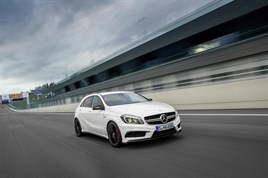 Mercedes-Benz has revealed the first details of its new 335bhp A56 AMG which will be on sale in UK showrooms in July.

It is the German brand’s first hot hatch and features a 2.0-litre petrol engine fitted to a seven-speed dual clutch automatic transmission help shift the new car from 0-62mph in 4.6 seconds and on to a limited top speed of 155mph. While the A45 AMG is a performance focussed model, Mercedes-Benz says it will still be possible to return 40.9mpg.

Customers will get an adaptive exhaust as standard that will beef up the noise from the twin tailpipes under heavy acceleration and close off when cruising.

An optional AMG Performance exhaust is available for customers that want a throatier sound during gearchanges.

As the AMG model, the A-Class gets a sports body overhaul as well as ARTICO sports seats, carbonfibre look dash and black/red seat belts on the inside. Dealers will also have a large selection of individualisation options for A45 AMG customers.